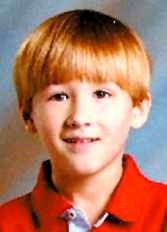 Details:
Mason Scott, age 6, had mild autism and was afraid of fire. He was due to enter the first grade that year.

With her husband away, Mason's mother set fire to his room in the middle of the night. Then she took her other son and climbed out a window, leaving six-year-old Mason locked in the house. Neighbors and then the fire department tried to get to him, but they were unable to save his life. Police grew suspicious because Mason's mother had exited the house fully dressed and mentioned having "killed her son". Two years before, Mason's mother had received a large sum of money from an insurance policy when her house burned down, and only barely escaped charges of arson.

Examining the house after the fire, authorities noticed that the smoke detectors had been deactivated and some expensive paintings and jewelry had been removed from the house beforehand. This time, she had taken out several life insurance policies on Mason, one only the day before he died, totaling $175 thousand. Investigators concluded that Mason had been drugged with codeine, Adderall, and an anti-nausea medication. The fire had been deliberately started, and Mason had burned alive.

Because of the heinous nature of the crime, and because she did it for financial gain, Mason's mother received a death sentence and is now on death row.