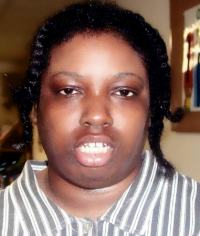 Details:
Christina Sankey lived with her mother and her sister Liza. She was severely autistic and severely intellectually disabled, and her favorite activity was rolling a ball. She liked to watch old Westerns, and she was very fond of her morning coffee.

When she was last seen, she was on a shopping trip to Macy's with a caregiver. Security camera footage shows her leaving her caregiver as the caregiver ignored her to look at jewelry. She returns twice before leaving, going down an escalator, leaving the building, nearly being hit by a car--and then, nothing. Her caregiver waited forty-five minutes before telling a store security guard that Christina was disabled, and an hour before calling the police.

Christina's body was found early the next morning, lying between cars parked in the street. She was partially undressed.

Later on, two people would come forward, saying they had seen someone matching Christina's description. One describes her looking at her feet instead of answering when asked if she was okay. Another says she was sitting a curb, playing with a cat. Neither one realized she was in trouble.

It would seem to be a simple case of a severely autistic woman getting separated from her caretaker, wandering away, and removing her own clothing as hypothermia set in. But Patricia, Christina's mother, doesn't believe that's the case: The circumstances under which Christina was found, she says, were not consistent with the severity of her disability.

Christina was found five miles away from where she was last seen, and her mother believes she would not have walked so far; she was uncoordinated and not athletic. Nor could she have used public transport, since she did not know how to ride a bus. She should not have been shopping in Macy's to begin with--learning to shop was not a part of Christina's care plan, since she did not have the potential to learn shopping skills.

Patricia also doesn't think that her daughter's lack of a shirt was due to paradoxical undressing from hypothermia. Her reasoning is simple: Christina did not know how to take off her shirt. Fingers numb from the cold, confused and frightened, Christina would have been in no state to suddenly learn how to undress herself.

But very little has yet been done in the investigation of Christina's death; no one knows what happened after she was separated from her caregiver. "No one cares about my daughter," says her mother Patricia. "She was poor, she was disabled... but she was my world."

Updates: As of April 25, 2014, the Philadelphia district attorney's office is investigating Christina's death.

As of April 22, 2015, Christina's caregiver was charged with reckless endangerment and felony neglect.

References:
Missing autistic woman found dead in West Phila.
The death no one cares about
Rage and - finally - action