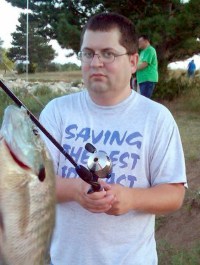 Details:
Joey Weber was an active member of his community. He was a church member and in the Knights of Columbus. Along with other people in New Age Services, a social group for people with disabilities, he worked at Joe Bob Outfitters.

Joey had a driver's license and was out driving one day. He probably broke a traffic rule, because the police tried to stop him. But being stopped by the police was an unfamiliar situation Joey did not know how to handle. Luckily, he was on the same street as the New Age Services building. Confused and having trouble communicating, Joey drove down the street and toward the New Age Services building, where he knew he could get help.

However, police saw only a man who was refusing to obey their commands and driving away from their officers. They called for backup. When Joey arrived at the building and got out of his car, they shot him. At the time, Joey Weber was probably upset and confused, but he was unarmed.

His friends held a candlelight vigil for him. It was attended by over 100 people from his community.