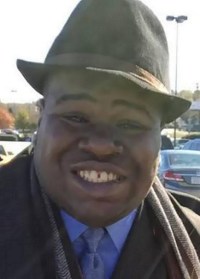 Details:
Deonn was diagnosed with autism in the mid-1980s, and his mother was told to put him in an institution. She refused, and Deonn grew up with his family. At six or seven, he began using words to communicate. At eight, he was using sentences. He played Special Olympics baseball as a first baseman. He graduated high school.

As an adult, Deonn worked as a bagger at a Piggly Wiggly's grocery store. Deonn loved wearing suits; every year, he bought a new one.

Consistently outgoing and friendly, Deonn knew everyone. He was especially fond of the police, firefighters, and EMTs in his town. He called the police and fire stations every week or so, just to chat and to encourage the officers. He knew all their names and their families, and had even memorized their schedules. Though he couldn't become a police officer himself because of his disability, Deonn was well-loved by his local police force and had been made an honorary member of the police department's motor squad.

He was a deacon at his church. He remembered birthdays and anniversaries without fail. His pastor says of Deonn, "He had no fear or boundaries of love and getting close to people... He just would love anyone, and he had a boldness about him to get to know people."

Deonn was outside his own home, getting the mail, when five men accosted him and stole his phone. One of them shot him in the leg. Emergency services were called, and the police and paramedics came to rescue Deonn. They got him stable and safely to the hospital. During the next eleven days, Deonn received constant visits from his police and fireman friends.

It seemed as though Deonn would survive, but unfortunately, Deonn's injury caused a blood clot which traveled to his lungs and killed him eleven days after the shooting. Before his unexpected death, his last Facebook post had stated simply, "I love everybody."

Deonn's funeral was attended by hundreds of his friends, including the public safety personnel he so loved. His pastor eulogized, “God chose him in his mother’s womb to teach people in this city of Columbus, Georgia, and around the world, how to love everybody and point people to Jesus Christ, and my, my, my, did he do a wonderful job." At his funeral, he was designated an honorary firefighter and chaplain, and four bells were rung--the signal to firefighters that means, "The fire's out; the job's done; you can go home."

All five of the men who robbed and shot Deonn have been arrested.